Recall affects over 320,000 Toyota and Lexus SUVs and Trucks 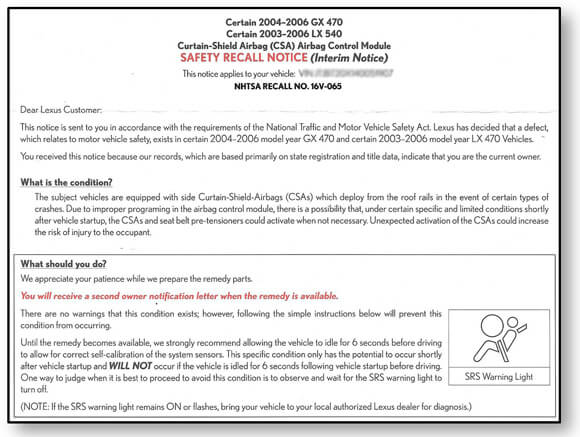 What is the issue for this airbag recall?

Toyota and Lexus have been sending out safety recall notices they refer to as an "interim notice" to us owners of certain models and years to alert us to a potentially dangerous issue with the side Curtain Shield Airbags (CSA) which could make them deploy inadvertently at engine start up. This comes after Toyota notified the National Highway Transportation Safety Administration (NHTSA) on February 5 of this recall. See the screen shot of the letter above, which Lexus sent to us.

What is the root cause of these airbag failures?

According to the letter from Lexus, the affected vehicles have side Curtain Shield Airbags which are supposed to deploy from the roof rails in the event of certain types of accidents. Lexus admitted there is a bug in the programming software inside the airbag control module.

The side curtain airbags can deploy without notice and cause injury

The nature of this programming error is such that under certain limited conditions shortly after vehicle startup, the CSAs and the belt pre-tensioners could activate when they should not be activating. If your CSAs activate unexpectedly, there could be an increased risk of you being injured.

Am I at risk of injury? Should I stop driving my Lexus?

You don't need to stop driving your Lexus, and in fact Toyota and Lexus are currently working on a remedy for this problem. NHTSA states on their web site that Lexus anticipates the remedy to be available in September, 2016. The remedy will consist of the replacement of the airbag control module, presumably which will have an update to correct the bug in their code.

Is there a workaround for me to avoid this failure?

By leaving your engine in idle mode for 6 seconds before driving, Lexus claims this allows for correct self-calibration of the system sensors. Then when they are ready with our remedy, they will begin the repairs.

Which model vehicles are covered by this recall?

The following is a list of affected vehicles covered under this airbag recall:

I did not receive a letter from Lexus or Toyota, what do I do?

You can also confirm if your vehicle is part of any type of recall by checking your VIN on the NHTSA's Recalls Look-up by VIN search tool.

I strongly urge you to see if you can get on a waiting list for this recall repair at your local dealer; just call them to see if they have started a repair will call list yet. You'll want to be at the very top of the list, trust me on this one, I know from experience.

We reported that many Lexus owners have spent months on their Lexus dealer free dashboard repair waiting lists, with repair date estimates deep into 2016 or beyond. So when this current side curtain airbag recall remedy is ready to go, you don't want to be waiting forever. Some dealers are still telling customers 100 deep on last year's dashboard repair list they can only replace 2 dashboards per month.

We are likely to see similar wait times for this airbag recall, and you can also expect it to roll out months later than the September prediction on NHTSA's web site. When Lexus finally rolled out their cracked dashboard repairs last year, they were 6 months behind the original planned start date.

Our best advice for you is to check your your local Lexus or Toyota dealer every month until they are ready to start putting names on their will call list, and make sure you are first on that list when they start.

If you're still not convinced how serious I am, just look at the large number of complaints from Lexus owners in the comments section on our other blog article Lexus to Pay for Cracked Dashboard Repairs

Let us know your experience with this Toyota and Lexus recall in the comments below.