As the recognized authority on buying cars for over 17 years, we are often sought out by the press for commentary on articles, live network appearances and call in radio talk shows. Below are just a few of the news media companies who have written about us, and if available, direct links to the original stories.

If you are writing an article for a news site and need our commentary, we understand you are under tight deadlines. Please use our Press Contact Email Form for fastest results. We will get back to you in a very timely manner. 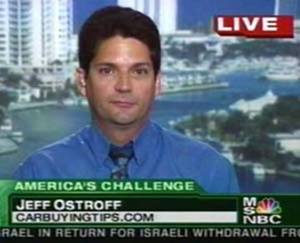 Wall Street Journal - 2010
How Not to Buy a Car - A WSJ Story about common new car buying mistakes that are easily avoidable. This article is only available to WSJ paid subscribers.

MSN Money - 2009
Used-car peace of mind -- cheap - Story about checking the vehicle history of used cars, and pitfalls to avoid.

Bloomberg - August 1, 2008
Detroit's Losses Mean Higher Car Payments for Leases - Jeff commented on this story about leasing complications for the big three as off lease vehicles have much lower values than dealers anticipated.

CNN.com - March 26, 2006
Car scammers target Web buyers, sellers - Jeff was interviewed for this story about internet scammers targeting sites from eBay to Autotrader, nailing victims all over the world. There was also an audio interview that appeared on CNN Radio.

MSN Money - March 26,2006
Car buyers' top 10 mistakes - Jeff was interviewed for this story written by BankRate that details the top 10 common blunders made by most new car buyers.

Better Homes And Gardens - March, 2004
Get New-Car Savvy Online - print edition, page 152. Jeff was interviewed by Better Homes for a story on how savvy consumers are suing the internet to make their car buying hassle-free. 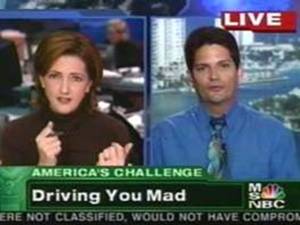 MSNBC.com - December 4, 2003
Con victims out $10,000 or more Jeff was interviewed by Bob Sullivan of MSNBC News for a feature story about how Fake escrow sites, and fake car sales are a devastating combination.

ABC-10 Miami WPLG TV - September 9, 2003
Internet Scammers "Phishing" For Your Identity. Jeff was interviewed by ABC-10 in Miami for a feature story about scammers who email you with Phishing emails, designed to spoof companies that you have login accounts with, and trick you into entering your sensitive information, credit card numbers, Social Security number, etc.

Kiplinger - June 19, 2003
Jeff supplied much of the warranty buying tips during phone interviews which Kiplinger used in their article "Avoid the 7 Deadly Sins of Extended Warranties."

Consumer Reports - April, 2003
Annual Auto Issue, Page 17. "Tricks Of The Trade" Jeff supplied Consumer Reports with most of the research and content for the scams listed (from our 2002 Top 10 Scams List.) Jeff also supplied them with the victims that were interviewed for their article.