Leading Cause of Death Among Teens - Car Accidents

A car in the hands of an inexperienced teen who does not understand the laws of nature is a lethal weapon. It's a very important responsibility that must be taken seriously or people will die. It's amazing how every day we turn on the TV and hear about a couple of teens who died in a drag race, crashed into a tree on the way home from a party or even during lunch hour at school. Take a look at our car crash photo gallery, maybe it will sober you up when you see what can happen when you are not a careful driver. 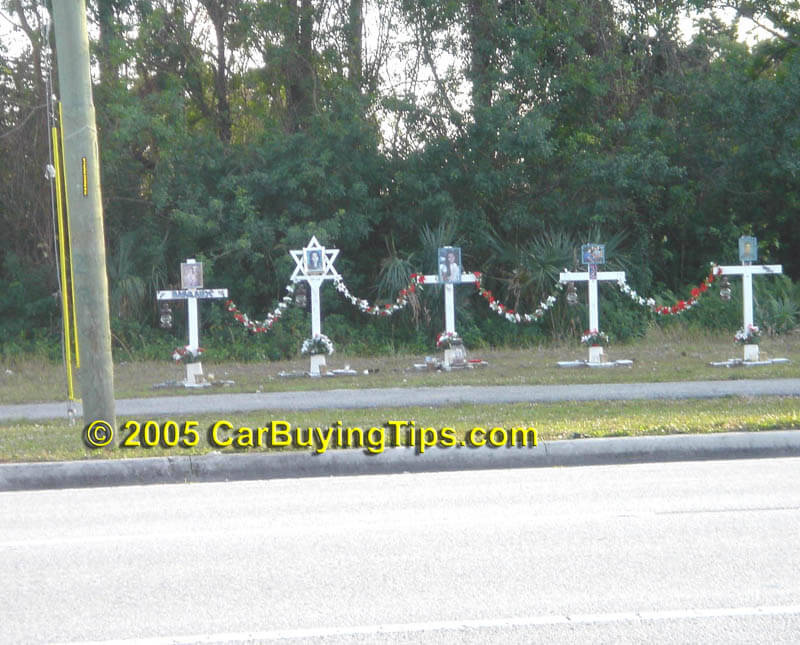 You would think after all these years and deaths that our teens would have gotten the message, but there is a never ending supply of young people who think they are invincible and that it could never happen to them. It can happen to them, their friends and to anyone at anytime.

It's heartbreaking here in South Florida, every where we go, we keep seeing all these makeshift graves setup after a few teens die in a crash. It's not just one or two here and there, they are sprinkled all over the place, in clusters of 2, 3 and 4! They place these giant lollipop signs that say "Drive Safely" all along the roadside, to indicate where people have died in wrecks. It's real gut wrenching to see them around the holiday season, when the parents of those killed go decorate the lollipop signs with holiday flowers and ornaments. There are way too many of these grave sites and we must stop this proliferation now. That is under direct control of you, the young driver. There's one spot nearby where more than 8 teens have died in a few crashes, I think 5 of them died in one crash. Young people often speed without wearing seat belts. If only they would wear their seat belts, they would have had a better chance of survival.

If you are traveling at 35 MPH and get into a wreck, due to the inertia your 150 pound body has, you MUST to be capable of bench pressing about 600 pounds to keep yourself from slamming into the windshield. This is not made up, it is a force of nature fact. No human I know can bench press 600 pounds, much less protect themselves in the 1/100th of a second it takes to slam into the windshield at 60+ MPH. Remember, in an accident, the car has already stopped, but you are still moving at 60+ MPH, thanks mostly to Newton's Law about objects in motion wanting to remain in motion until acted on by an outside force, i.e., windshield. Gosh, if only you had known about that silly little formula before you got into the car! Should have paid attention in Physics lab!

People who refuse to wear seat belts always tell us "I can react in time and brace myself." They obviously do not understand the forces of inertia. Most people are unaware it takes about 0.75 seconds for your foot to start pressing the brake once you spot trouble. The same principle applies to your false confidence that you can protect yourself from slamming into the windshield in 1/100th of a second. You owe it to yourself and your loved ones to wear your seat belt. You must demand that all passengers in your car wear seat belts. They will not think you are foolish, they will respect you when they see you are adamant about it. If you happen to get into an accident that everyone walks away from, you will be their hero.

Safe Driving Strategies to Live By

If you follow these tips below, you will greatly help yourself avoid wrecks, injuries and, most importantly, everyone arrives alive.

It's amazing how many wrecks will be prevented with this simple act. Your blinker can give another driver enough time to take evasive action and avoid a crash that you would have caused.

Don't Let a Cell Phone Land You in a Cell

We all love to talk on our cell phones, but come on, you really don't need to talk on your phone in the car. More importantly, NEVER text while you are driving. Have you ever been cut off by someone texting or talking on their cell phone? Have you ever had to pass a car going way too slow because they were talking on their cell phone? It's just a bad idea, because it robs you of your full concentration. It is even worse if you have passengers in the car distracting you from all angles. Most safety advocates tell you to pull over and stop if you are going to talk or text and many states are starting to pass legislation about cell phone use in the car. If your caller really needs to speak with you, don't you think they can wait 10 minutes? At the very least use the speaker phone or headset. 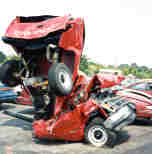