"Fast & Furious" star Paul Walker died in a fiery crash on November 30, 2013. His death hit home personally for us, because a former business associate of ours, Corey Rudl also died in the same model 2005 Porsche Carrera GT. We knew Corey Rudl personally because he was also the author of a book called "Car Secrets," which we used to sell for him here on CarBuyingTips.com 10 years ago. 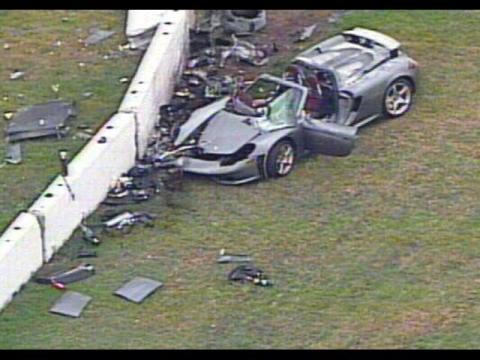 Corey was a smart and generous internet entrepreneur who also had given us his internet marketing courses for free because we sold so many of his books for him. His marketing courses had influenced and motivated thousands of us webmasters in the early days of the internet.

Unfortunately, 34 year old internet marketing guru Corey Rudl was one of 2 men killed in a car accident on a controlled raceway track on June 2, 2005. He was killed as passenger in a 2005 Porsche Carrera GT, strikingly similar to the way Paul Walker was killed in a car crash in this same model car.

The difference was Walker's crash is likely due to speed involving a car on an unsuitable public street, whereas Rudl's car crash occurred in a supposedly controlled and suitable raceway environment, where a chain of fateful events and mistakes revealed a process that broke down in a number of ways.

Details of Corey Rudl's death have overtones into Walker's death

Corey was attending a track day event for the Ferrari Owners Club at the California Speedway in Fontana, CA. He was then invited to be a passenger in Ben Keaton's Porsche Carrera GT to see how a German import could perform.

As reported at the time, a slower moving Ferrari merged onto the track, as directed by a flagman employee of the track, from the alleged poorly located pits at center field directly into the path of Keaton and Rudl in the much faster moving Porsche Carrera GT speeding around the track.

Keaton panicked and swerved to avoid the slower moving Ferrari. The Porsche left the track and slammed into a concrete barrier at approximately 145 MPH according to reports. Both men were killed, Corey at the scene, Ben a short time later at the hospital. A fire also started which was put out by emergency personnel.

We of course were stunned by Rudl's death at the time as we were business associates, along with other friends of ours who have operated web sites and benefited by Corey's internet marketing courses.

Two years later in 2007, auto news magazines reported that Porsche settled with Corey Rudl's widow Tracy Rudl for $360,000. She filed lawsuits against just about everyone involved, totaling about $4.5 million. Ben Keaton's estate alone was reported to be responsible for about ½ of the settlement amount.

The known issues with the Carrera are not new at all; the racing forums in 2005 were lit up with reactions to the crash and discussion about problems with that car and the dangers of racetracks.

Fast forward to 2013, Paul Walker was a famous actor and Corey Rudl was not known by the mainstream public, now Walker's death is shining the spotlight on this car with a troubled history.

Reports at the time of Corey Rudl's crash had mentioned that Keaton was warned about the handling problems with the Carrera GT. He allegedly ignored his mechanic's advice, inviting Rudl aboard for a ride without mentioning issues known about the GT, and Rudl's airbag never deployed either.

We've also seen reports from mechanics recently stating that a notable number of these limited production Carreras have been crashed, supposedly up to 20% of the approximate 1,300 cars in the market.

About 600 of these GTs with top speeds over 200 MPH had been delivered to the Americans, probably most of them had no business driving one because its finicky nature requires race drivers of particular skill to operate it.

Another point to ponder if you look at the last video and photos we have all seen of Paul Walker alive getting into that ill-fated red Porsche, notice how low the car is to the ground and they were driving on hilly terrain. That car, driving at that speed, probably had no business being on the road that day.

Roger Rodas, who was Paul Walker's friend, was allegedly at the wheel of last week's fatal crash. He was an experienced race driver, but may not have enough experience driving that particular car at high speed in a controlled racing environment, maybe not enough to become proficient at handling it.

I am wondering was the car warmed up enough and the proper tires for that speed installed, inflated correctly and ready to be used at high speed on those road conditions?

Reports stated that Rodas's GT had very few miles on it, and that it was rarely driven. Other reports mentioned he and Walker were looking at a potential engine issue with it when they took off on their fateful drive. Not the time to flirt with the top speed on a known finicky 600 horsepower car.

I will go out on a limb here and speculate that the investigation into Walker's death will show that speed, albeit with an experienced race driver at the helm without much experience driving that car, with no stability control, at high speed in an uncontrolled environment unsuitable for that vehicle is what caused the crash.

I've seen too many senseless deaths from men who buy high powered race cars and crash them. Just search YouTube for Lamborghini crashes, you'll see guys simply pulling away from a traffic light and they fishtail out of control and crash. They have no respect for the power. The Super rich, buying super cars, but not driving with super skills.

We can only hope that other guys high on testosterone and with millions burning a hole in their pockets learn to respect these high torque, high powered monsters and thus live a longer life.

You've heard that a fool and his money are soon parted, but I tell you that a fool (with a lot of money and no respect for the power of the machine) and his life will soon be parted.

Please add your comments below.