The Car Dealer Just Increased My "Incorrect" Used Car Windshield Price - Can They Do That? 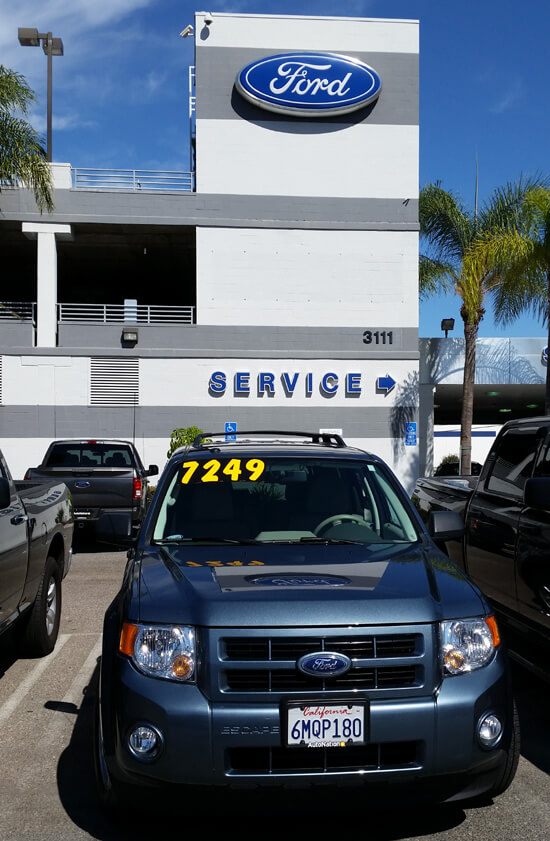 Has this ever happened to you? You are shopping at your local Ford car dealership and the salesman is dragging you all over the lot looking for used vehicles you might like, when one lower priced model catches your eye. The price seems really good, almost too good, but you decide to buy the car anyway.

Sorry, wrong price on the windshield - correct price is $10,000 more

But once you end up in the finance office, the mother of all bombs is dropped on you. The sales manager informs you that there was a mistake on the windshield and they priced your used car wrong, the real price is now $10,000 more. You scream out "what?!" as the angry sensation of what seems to be a bait and switch scam falls over you.

Suddenly your new vehicle wedding plans turn into a divorce before the betrothal period is even done. By now your blood starts boiling, you feel angry, scammed, defrauded, low-balled, defeated and what was supposed to be happy milestone moment in your life just turned into a nightmare letdown as they just let all the air out of your balloon.

Real life case in point at a Ford dealership

This actually happened this week to one of our visitors named Laura here at CarBuyingTips.com. Laura was used car shopping for a 2010 Ford Escape Hybrid. She spent 30 minutes on a test drive, asked to see service records as she was extremely interested in the car at the windshield sticker price of $7,249 as shown in the photo above that she took at the dealership.

Many dealers are currently asking $15,000 and up for that model year Ford Escape, so the salesman should have really known the price was wrong from the get go, it doesn't leave a glowing testimony to his proficiency at his job and knowing prices. To further guide you as to the true market value, we saw on eBay Motors that most bids for 2009-2011 non-hybrid 2010 Ford Escape models max out around the $12,000 to $14,000 price range.

The sales manager returned along with Laura's salesman and said the car was now priced at $17,249, a whopping $10,000 increase over the much lower and more attractive windshield price. The sales manager became firm, stating that he had to feed his family and they were not selling the car for $7,249 and it was an hourly employee who incorrectly stickered the car. We did later confirm that this Escape appeared on their web site inventory at the "correct" $17,249 price.

I can vouch for the hourly employee error phenomenon, having seen it in action; most car dealers pay their bottom line uneducated employees $8-$10 an hour. What kind of rocket scientist do you expect at that pay rate? Remember, mistakes will be made.

Can they really get away with that? What are my options?

So what do you do in this situation? Many questions begin to fill in your head. Did they break the law? Did I just get suckered in and low-balled by the salesperson? Is this a bait and switch scam? Is it worth suing them and will I win? Let us examine the facts in this case and look at this practically and logically.

Did the car dealer really break the law?

I don't think in this case that the dealer did anything underhanded or illegal, based on the fact that they immediately corrected the price on the windshield while Laura was there. The original price on the windshield did seem artificially low and it does sort of make sense to add a 1 in front of that $7,249 you see in the photo above.

We were able to get a screen shot off the dealer's web site showing the car in their online inventory. Indeed, the price was $17,249 online, so this does back up the dealer's claim of an employee putting the wrong price on the windshield, leaving off the number one. See the screen shot below off their mobile web site: 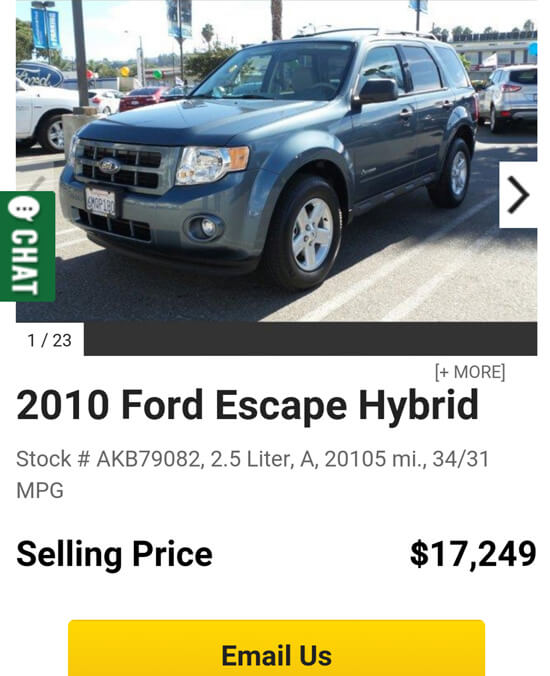 Screenshot of the dealer's web site shows the correct price

Of course many used car dealers often lower the price by $3,000 anyway; we all know that retail pricing is often $3,000 to $4,000 more than actual person to person market value. Used car dealers will often negotiate big off their inflated asking price to make you think you are getting a deal.

I checked eBay Motors recent transactions filtered by "Completed Items" but there were no conclusive results for Ford Escape Hybrid sales recently. I would have to figure the car is worth $14,000 max anyway and would have walked just based on the dealer's new higher $17,249 price.

On top of the sales manager's arrogance and not willing to come down on the price, the manager was being aloof; the salesman at first would not give Laura his business card or tell her his full name to make it harder for her to complain to authorities or to Ford Customer Care. That is really not giving me a warm and fuzzy reason to stay and buy a car from these people. This is like Hillary Clinton and the missing email server after the fact causing an erosion of trust.

Litmus test of the dealer's honesty: Did they correct the price?

Laura told us the dealer immediately changed the windshield price to $17,249, which aligns with what we saw in the dealer's inventory screen shot above. A great litmus test for you to tell if the dealer is breaking the law is to drive by the dealership the next day and see if the price was "corrected" on the windshield. If the price you see is the same low-ball price from yesterday, then you know the dealer is scamming people with a bait and switch.

If I had a car on my lot with the wrong price on it, you can be real sure that numbers would be yanked immediately and a new verified correct price up on the windshield before the wind could even change direction. Laura drove by the dealership the next day to perform the litmus test of the dealer's honesty about the correct price. What did she find?

The photo below shows the Ford dealer did indeed keep the higher price on the windshield, he did not revert back to the low-ball price; in fact they upped the price even more, now by an extra $1,000 to $18,311. My guess is they inflated the price so they can negotiate the used car selling price to the next buyer/sucker, sinking the price back down to $17,249 to appear they are catering to the buyer by haggling lower. It's all the cash flow shell game. 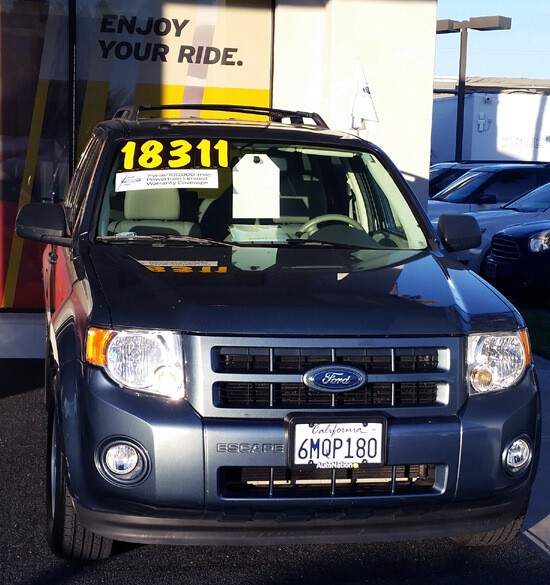 The dealer bumped up the price even higher the next day

Can the dealer legally be forced to honor the lower windshield price?

Here in Florida the law actually does protect advertisers, including car dealers from what we call "typographical errors." I have seen car dealers, restaurants and grocery stores publish the wrong prices in their ads, which are created by imperfect humans. I worked in a liquor store in college that had an error in the newspaper print ad and we posted signs in the store announcing the error in our newspaper ad.

The state requires advertisers to clearly post in a conspicuous place in their business a notice that there was an error in the ad and to show the correct price. With this Ford dealership, where there was no print ad with a typographical error, I still doubt that any court would force them to take a $10,000 loss on the sale of this used hybrid vehicle. It does appear to be an honest mistake.

I am a little miffed however that a seasoned professional salesperson was seemingly unaware that something was wrong as soon as he saw the low windshield price on the car originally, it just made the buyer lose all trust in them. He strung the buyer along. Funny how eventually someone seemed to know that the sticker price was incorrect.

Also the fact that they would not even budge off that high price would be enough to make we walk out of that dealership in a hurry. Their asking price is simply way too high for this car, which has so few sales of the hybrid on eBay, that you can't get a decent reading on the market value. That tells me this vehicle is not worth their asking price. 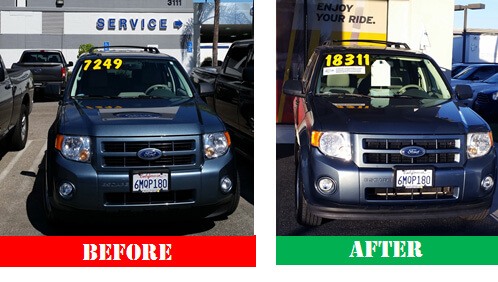 Let us say you perform your car dealer litmus test and they fail, because you discover the next day that the dealer did not correct the windshield price. This means now they are breaking the law, because they know the windshield price is not the correct price and they are now illegally low-balling people. This would now change from an honest mistake to a dishonest fraud.

If you see this, you should first file a complaint with the Better Business Bureau and you should also file a consumer complaint online at your state attorney general's web site.

After that you should call the manufacturer's customer service line and inform them they just lost you as a customer because their dealer is purposely low-balling people.

Tell them you are going onto social media to warn everyone about your experience at their dealership. Bottom line is that this is not worth trying to sue them nor would you likely find a lawyer willing to waste any time on such a small amount.

In scenarios like this, if you did not shell out any money and lose money it is best to just walk away and focus your best efforts on getting your great deal on a used car somewhere else. Don't rule out buying from a private party either. Be sure to read our related guide, Buying a Used Car - Tips and Scams to Avoid

Let us know if you run into this situation and how it worked out for you in the end.