Football season finally kicked off to a rip roaring start, unless you are a New York Giants fan but that's a topic for another blog. With football season comes the great American tradition of the tailgate party. 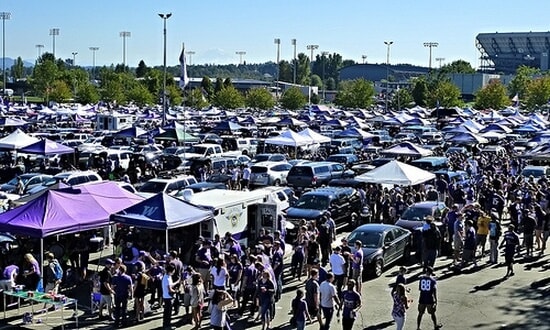 A great tailgate has plenty of food, drink and fellow fans. However, you need to get everything and everybody to the game.

One feature that comes in very handy for a tailgating vehicle is outdoor storage. What do I mean by that? Basically, a pickup truck bed. You don't want your greasy, dirty grill inside your nice clear car, do you?

Does that mean that a pickup truck is mandatory for a great tailgate? No. While pickups are great for hauling your tailgate gear, they do fall short on seating capacity. While in some parts of the country the bed is considered acceptable seating space, we are going to discount that for safety reasons.

To bring the biggest crowd to the game, you'll want an SUV with a 3rd row of seating. These vehicles can legally accommodate 8 passengers. They don't carry quite as many people as a mini-van but do I really need to explain why you don't want to tailgate in one of those?

Since you will be parking in a stadium parking lot, you don't really want a fancy new vehicle. Your car is likely to be hit with footballs thrown by people proving why they are watching the game instead of playing in it. Ideally, my pick would be a truck or SUV that looks more comfortable at a Rodeo than on Rodeo Drive.

Unless you are going to buy something specifically for tailgating, you'll probably have to compromise. See what cars your tailgate buddies own and go with the one fits your tailgating needs the best. Hopefully, your tailgate party won't be the best part of your game day experience!