Bench Seats or Captains Chairs - Which Are Better?

SUV seating has come a long way since the days of the old Chevy Blazer. Bench seating in the first row is a thing of the past that went out with the Dinosaurs. Now, the focus is on the second row where many models have the option of big, comfortable "captains chairs" instead of the standard bench seats. These chairs are often called "bucket seats" when they are offered in sedans and coupes. I guess the marketing departments decided that a more impressive name was needed for use in SUVs. 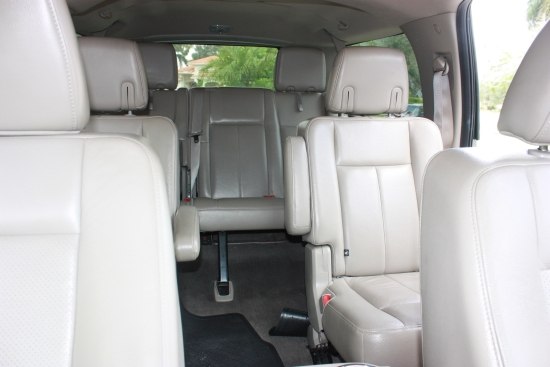 The option for captains chairs is not too expensive. For example, it is a $995 option on the 2015 Dodge Durango. For that model, the option also includes a rear seat mini console with cup holders and storage. If you use our negotiating tips in our new car buying guide it will end up even cheaper. Relative to the cost of the of the car, your decision will likely be one of preference rather than cost.

The Case for Bench Seats

Bench seats in the second row will give you the most seating capacity. You'll be able to seat three in that row and get the maximum eight passenger capacity for the vehicle. Many of the higher end models will have a fold down armrest and cup holder quasi console.

The Case for Captains Chairs

Captains chairs will bring a new level of comfort to the second row passengers. You'll forget all about what is was like sitting in the back of a 1979 Caprice on a long family road trip. The difference is really night and day. You do lose one seat of capacity so if you need to seat the maximum, you'll have to trade utility for comfort. Models that don't have a console also have benefits when it comes to the third row of seating.

Console Between the Seats

Some models leave the space between the captains chairs open. This design makes for very easy access to the third row seating. Other models include a console in between the seats. There are some pros and cons to both designs. If you like having a console, there are OEM and third party accessories available to add one if your model doesn't include one. However, if you don't want a console, don't buy an SUV with one. Removing it probably won't work out too well.

Having a console between the seats in the second row has some benefits. A console gives you additional storage space that is great for electronics like cell phones and portable game systems. They also have cup holders for easy access to drinks and they lower likelihood of kids spilling them.

On the flip side, the console removes the easy access to the third row of seating. On the rare occasions where you want to put a full size adult in the third row, having the aisle created by captains chairs without any console is a big plus. The space taken up by a console also reduces the width of the seats making them less luxurious.

The bottom line is that with all of the improvements in SUV seating, everybody is a winner. They are so much more comfortable than they used to be. My guess is that the next area of improvement for interior comfort is third row seating!